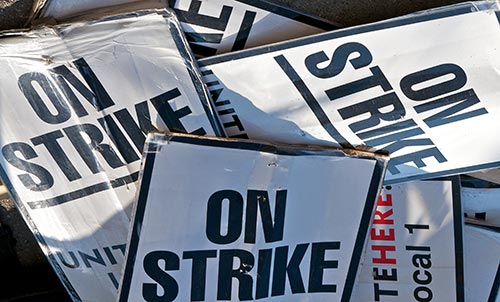 A labor dispute of any kind between an employer and its employees will not only have an immediate impact on an organization’s productivity but can lead to serious safety concerns for the overall business operation. If a potential work stoppage is forthcoming, is your company prepared for the additional security measures and procedures that may be necessary until a stabilized work environment is restored?

The dedicated and experienced professionals at Integrity have prepared hundreds of organizations for labor disputes by implementing strategic plans tailored to each company’s individual needs. General planning considerations when faced with a possible strike or work stoppage can be separated into three main stages of planning: Pre-Strike, Active Strike, and Post-Strike. It is the planning and preparation for each of these stages that will determine how your organization withstands any action.

Many organizations have found it beneficial to assign a project manager who is responsible for facilitating and overseeing the procedures and protocols that need to be in place for the pre-strike, active strike and post-strike event. In the initial stages of planning, the project manager can be an invaluable tool for leading an organization through the following phases:

Management Goal Setting: When faced with a labor dispute, it is recommended having a planning meeting with key members of the organization, which should include executives, legal representation, key department management, human resources personnel, and security. The purpose of this meeting is to determine the company’s objectives and business continuity plans, and to define and clarify each department’s role and responsibilities during the various stages of the work stoppage. It is also imperative a unified management message and strategy be agreed upon and implemented.

Determining Risks and Vulnerabilities: All facets of the organization’s operations should be reviewed, including prioritizing site locations, assessing each company facility, as well as identifying possible risks for all company personnel.

Strike Plan: This phase is where the preparation and development of risk reduction plans take place to address the potential threats and vulnerabilities identified.  Planning for the use of a special security team and observers as well as executive protection agents is often discussed during this phase.  Press relations and crisis management will also be introduced during this time, with special importance focusing on the establishment of communication protocols. If an organization is going to function even minimally during a labor dispute, effective communication is vital. From the onset and continuing for the duration of the strike, workable channels of communication must be open. This should include the communication between management and employees (union and non-union), police, fire and EMS officials, security personnel, suppliers, customers, local government, and media. Once a labor dispute begins, no one should be negatively impacted because of a failure in communication.

Based on the size of the labor dispute (or if required by the organization), the project manager will structure a command center, which will be used to manage all needs that arise from the work stoppage, including the scheduling and deployment of security, observers, and executive protection agents. Upon strike activation, the project manager will enact numerous safeguards including securing the perimeter and regulating the movement of employees to and from the worksite. Observation of the premises to detect and help prevent vandalism and other security risks will be handled by a special strike team consisting of security officers, video investigators, and documenters.

Security personnel will be stationed at key locations throughout the property and along the perimeter to include entrance and exit points. Security personnel are to maintain and control access to the site and work in conjunction with the observers, video investigators and documenters, to identify inappropriate or illegal activity.

Documenters work in conjunction with the video investigators and are not only responsible for gathering real-time data during situations but are also trained to gather needed information after issues or events, such as witness statements.

Observers should be posted at all entrances, approach routes and parking lots to document individuals involved in unlawful acts of violence, property damage, blocking of those trying to cross picket lines, and denying vehicle access to the property. The observers will provide this evidence to and work with the company’s legal representation on any possible legal action.

Once a labor dispute has been settled, the focus will logically be on resuming normal business operations. But, it is crucial to plan a time where management sits down and conducts a thorough review of what transpired during the first two stages. A review of what happened, what worked, and more importantly what did not work, is key to improving future strike planning. This management meeting should take place sooner rather than later, as the events and what transpired will be fresh in everyone’s minds. While there may have been great planning and time devoted to the strike plan, there will often be unforeseen incidents and crises that occur which are unique. It is during this post-strike stage that the initial strike plan is reviewed in its entirety, updated, and notations made regarding what were unforeseen incidents. This post-strike activity is key to future planning.

This article provides a broad overview of what is involved in preparing for a work stoppage. For further information regarding preparing for a labor dispute and subsequent strike, please contact INTEGRITY Security Consulting & Investigations.